Floods in Colombo! A not so-familiar incident until a few years ago has become an all-too familiar occurrence whenever there is a heavy downpour. Several areas in the Western Province were submerged following the torrential rains on 3rd and 4th May that flooded much of the city of Colombo.

Heavy rains received on 03rd and 04th May resulted in severe flash floods which displaced a total of over 145,000 island wide. More than 50,000 were affected or displaced in the Colombo area.15 people lost their lives which included 3 deaths form Colombo due to drowning and electrocution. The flooding combined at times with high winds, resulted in destroyed homes and many been highly damaged.

People's park, Maradana, Reid Avenue, Ward Place, the National Hospital…….areas not normally known as 'flood-prone' sites, were under water for several hours, disrupting the smooth flow of life and causing chaos all around. Heavy showers also damaged the roof of the country's Parliament, while parts of the main Galle Road in Colombo were washed out Schools in Colombo were closed on Thursday and Friday as approach roads to the capital were submerged.

The main causes for floods are blocked drains and canals, unauthorized constructions and the century-old drainage system in the Colombo city which fails to absorb the present high volume of water or carry the water to the sea. The city's drainage lines were clogged by garbage, septic sludge, and the debris and dirt that had collected on roads and had been swept or washed on to the drains. These drains had not been cleaned or properly maintained. The other main cause for this havoc is the filling up of flood retention areas, which were identified some years ago.

However several measures have been taken to solve the problem. A coordinated effort with the Colombo Municipal Council (CMC), Sri Lanka Land Reclamation and Development Corporation (SLLRDC), Road Development Authority (RDA) and other state agencies and institutions have been taken to have a sound flood retention system implemented soon in the city.
Posted by Dr. Hiran Amarasekera at 2:31 AM 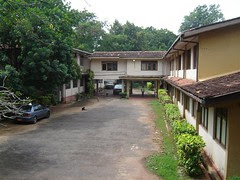